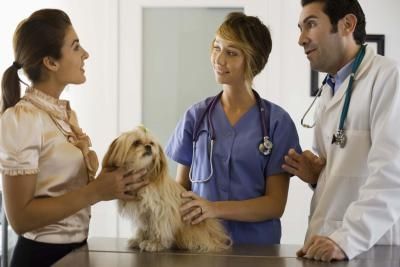 The vet tech that your pet sees at the vets office is a highly skilled individual. They are the equivalent of the nurse that you see in the doctors office for humans. It takes almost 2 years of education for them to qualified to work in a veterinarians office. In some states they are also required to complete another 2 or more years on the job before they can be certified. The education and time invested is not cheap. So you would think that the pay rate after graduation and even certification would be well worth it. Sit down and be prepared to hear the harsh truth as I will list below the average wage scale of the under paid veterinary technician.

According the the federal government the average wage is $14.28 an hour. That means there are plenty of techs that earn under that amount as well as a few that earn more. The lowest I have seen advertised is $8 an hour in California and around $9 in Oregon.  I have also seen an ad for one in California for $20 an hour but that job was for a local city run animal control office and duties also included police officer. The federal bureau of labor statistics lists the highest yearly pay at $39K and the lowest at $29K a year (for the year 2010).

So why are they so under paid? I would venture to say that they have been unfairly classified the same as a CNA for humans (another highly under paid profession).  Unlike the CNA, the vet tech has had highly skilled training in X-Rays, ultra sounds and assisting in operations. They treat a wide variety of species.

I personally feel that when I am paying for a vets office visit of $200 or more for 15 minutes of attention to my dog or cat that the vet tech should be paid more than $2.50 for his/her time (15 minutes @$10.00 an hour). The head vet often does not attend the visit or may pop in for a minute or less, yet reaps the reward of running the business.

I thought about becoming a vet tech just 3 years ago when I was offered a grant to go for the course. I decided against it when I found out the pay rate.