The cute little creature in the picture above is an ermine, also known as a stoat and the short tailed weasel. The beautiful coloring of this relative of otters, mink and wolverines is the ermine’s summer coat. The ermine’s coat changes to a thick warm all white coat in the winter. The only part of the ermine’s coat to not change color is the very tip of its tail, which remains black.

The ermine is a small but fierce hunter. About the size of a small squirrel it will hunt and eat birds, fish, eggs, rats, mice and other small mammals. It kills its prey with a quick bite to the base of the skull to sever the spine.

They are found throughout the northern hemisphere from North America to Asia. They have been introduced to other countries in attempts to control mice and rabbit populations but they failed. Instead those countries now have ermine population problems.

At one point in history the ermine was almost hunted to extinction. Its white winter coat is highly prized as the fur used by royalty. The pope’s ceremonial robes are made from ermine pelts. The white fur seen on many royal robes is often ermine fur.

I found this cute little ermine on Amazon 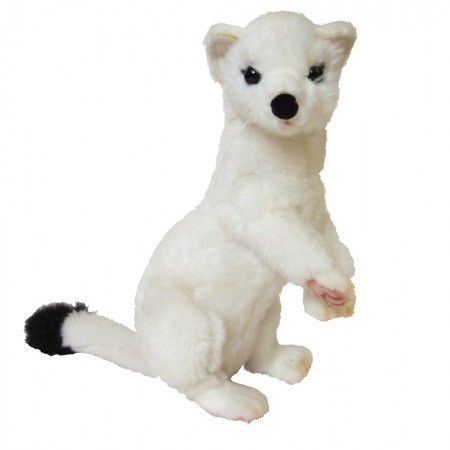