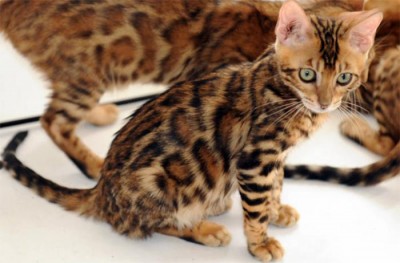 The Bengal cat is one of the more recent additions to the group of cat breeds. Yes they are a domestic cat, not a wild cat. They are noted for their coat patterns to closely resemble an Ocelot or Jaguar. They were originally a cross between a domestic cat an a wild Asian cat. It was commonly referred to as a “hybrid” but as most animal breeders know, hybrids are sterile and cannot breed. This breed was a cross, just like a wolf and malamute cross and not a hybrid like a mule. 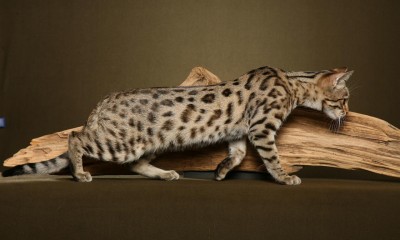 Bengal cats that are kept as pets should be the 4th or 5th generation from the original wild cat and domestic cat mating. Even though there are about 60K of this cats around the world they are not recognized by all of the cat breed associations. In fact one of the world’s largest cat registries in the world – The Cat Fanciers Association, does not recognize the breed. 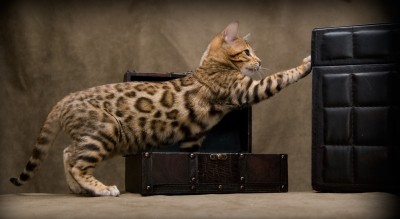 You can find out more about this breed at the International Bengal Cat Society or at this wiki page. I would also like to add that the kittens are not cheap so if you do want one expect to pay a bundle for it. I found several that were for sale in the $1200 price range and up. I also found so called breeders that were selling tabby cats claiming them to be Bengals. There is a broken stripped tabby cat breed which looks like it is just spots and they are NOT Bengals. See the photo below for a spotted tabby. 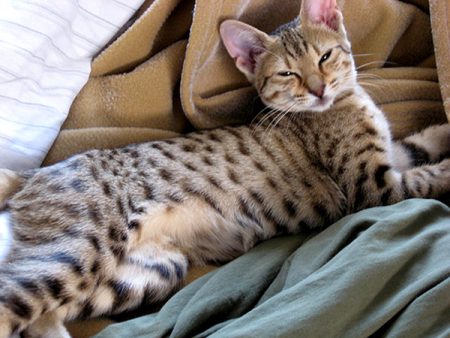 The photo above is from this website – Catster.com and there you can find out more about the different coat patterns of the tabby cat. Another great resource for spotted tabby types is this page. It has photos of different colors of spotted tabbys.