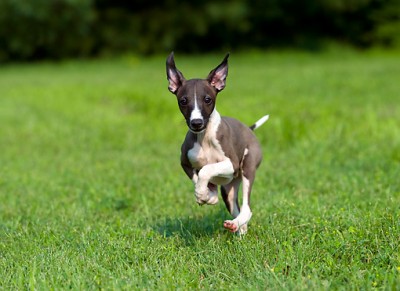 About 8 years ago our family was looking for a small breed puppy or dog to add to our family. We were open on the breed but wanted a dog that would not get bigger than 15 pounds. At the local animal shelters all the dogs were large breed dogs and some extra large. We had a price limit of $80 and planned on getting a shelter pet so that the money could go toward the spay or neuter and the license fees. That is what we had done in the past.

I looked in our local paper but all the ads were from the local backyard breeders who thought they could get $400+ for a cross breed. The local private rescues were the type that needed a 10 page application filled out, a background check and a pre-screening of our property. I was told by one rescue that because we had horses and cats they we would not qualify. Another rescue had a $300 placement "fee."

So our search continued ………..and I looked on Craigslist. There I found an ad that looked promising. It was about an Italian Greyhound, A full grown female. The ad said that the owner was moving and could not take the dog with him. He was looking for a great home for his pet. No mention of a "placement fee" or a price. I emailed him and he replied with his phone number. I called and we talked. The dog sounded to be the ideal pet for us. Still no mention of any money.  I invited him and the dog over so we could meet.

About 30 minutes later he showed up on our doorstep. I invited him in and him and his dog met out family and the dog just loved us. After about 20 minutes the owner then dropped the bombshell. He could not part with the dog for less than $600…………….

I showed him the door. I was not pleased with being misled. My husband said the man probably tried to size us up for how much he thought he could ask for.

It was not a loss in the end. About a month later I found my soul mate at the local animal shelter. My little miniature pincher was waiting for me after being at the local pound and unclaimed for 3 weeks. His adoption fee, which included micro-chipping was only $25. Eight  years later he is still with me, in fact staring at me as I write this.