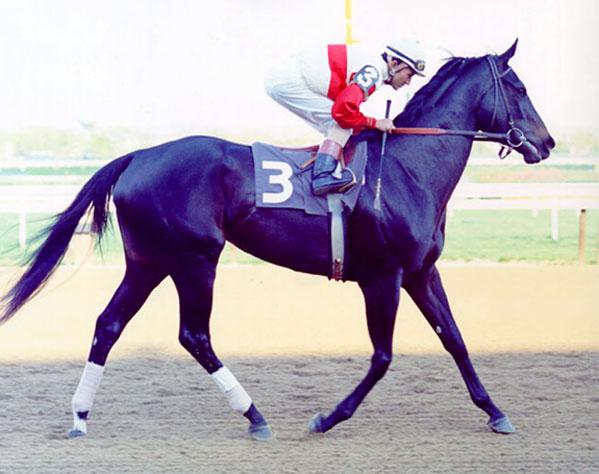 Ruffian was a Thoroughbred race horse who died at the young age of three as the result of a racing accident. The accident was televised to the entire USA and most of us horse lovers watched in shock as Ruffian broke her leg.

She was a tall mare at 16.2 hands. She set many track records for speed. She also ran on injured legs. After a race called Spinaway (which again she set a new record) she was found the next morning by a stable hand in pain. She had not eaten her food and her back leg was swollen. It was discovered that she had a hairline fracture. Now a hairline fracture is painful for us humans and we need at least 8 weeks to recover and heal from it just to perform regular daily tasks. Unfortunately for Ruffian she was known for not showing her pain and won races with injuries. That may have led to the next chapter in her short life.

Ruffian was touted as the “Queen of the Racehorses” of her day. This led to a media frenzy and the ultimate setting up of a match race – boys versus girls – on the track. Foolish Pleasure was the top racing stallion of the day so the match would be her against him.

This match race was on TV and I was just one of millions who set aside time to see it on July 6, 1975. To us TV viewers, we had no idea if Ruffian was physically fit for the race. I didn’t know about her previous injuries, only that she kept winning all the races they entered her in.

The race started out fast and it was not until after the first furlong that Ruffian broke her leg……but she kept on running. Remember, she did not want to stop, that is bred into all racehorses.

I remember watching her limp about as they led her off the track and rushed her to surgery. The official story as to what happened next was that she came out of the anesthesia she kicked off her cast and made her injuries worse. They decided to have her put down at that point. The rumor mill at the time was quite different. It was said she was worth more dead than alive so she was put down right after the race. Either way she was gone. The nation was in shock and now more aware of the plight of the injured racehorse.

As a result, after Ruffian’s death there has never been another match race between two horse racing champions.

It was in 1982 that Emmilylou Harris released a song called “Born to Run,” it was used as a theme song that year at the Kentucky Derby. What it did do was bring back memories of Ruffian’s last race. There was a rumor that the song was a tribute to Ruffian.