I was doing some research for another article on dogs when I got side tracked and found out something that blew me away. I grew up on paperback horse story books and Marguerite Henry was one of my favorite authors. She wrote about the ponies of Chincoteague and other horse books but her best known one was Misty of Chincoteague

Her books followed the adventures of a real life pony and her offspring. Many children were big fans of the books, much like the kids today that grew up with the Harry Potter books. But this little tale has a twist to it. You see when Misty died at the age of 26 in 1972, instead of digging a grave for her, they summoned a taxidermist and had her promptly mounted. Sounds like shades of Trigger, that other well known stuffed horse. 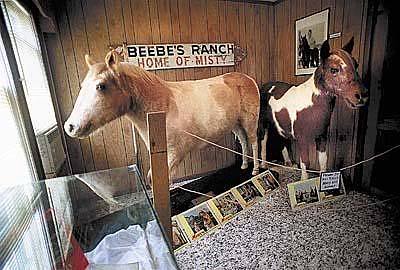 She went on display so that her adoring fans (small children no less) could still pay to see her. If that was not enough, one of her offspring, Stormy (yes that Stormy) was also mounted when she died in 1993 at the age of 31. The photo above is of the 2 of them on display.

To read more about the history of what happened to Misty and her foals in real life, I found a website that have some great facts. It has an in-depth history about the Beebe family and how Misty was bought by Marguerite Henry. There are many photos of the ponies and their descendants as well.