The Tasmanian Devil is slowly dying out. As of 2003 a rare but fatal tumor disease has killed almost half the population.

Facial tumor disease is believed to have killed tens of thousands of devils. First identified in late 2003, the disease appears to progress rapidly through adult devils and is always fatal. Their numbers are thought to have halved from around 150,000 in the mid-1990s. 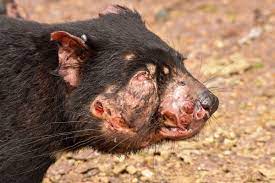 Devils are not the fierce animal as depicted by cartoons.

Devils are usually shy, often calm when they are trapped and docile when hand-reared. Although equipped with powerful jaws and muscle enough to pull down bigger animals such as kangaroos, a 10-kilogram adult devil usually prefers to eat carrion. It fights other devils for this food, resulting in wounds that could lead to disease transfer.

No Responses to "The Tasmanian Devil is dying out from disease"